The Salvation Army upgrades with Toshiba

Big savings and improved productivity are just two of the many beneficial outcomes for The Salvation Army’s Territorial Headquarters since upgrading to a fleet of Toshiba e-STUDIO multi function devices (MFD’s).

Based in Elizabeth Street Sydney the headquarters is staffed by almost 200 employees and occupies six levels of the building. It is the administrative nerve centre for more than 300 external Salvation Army sites located throughout New South Wales, Queensland and the Northern Territory.

The board and management of The Salvation  Army are very conscious of containing costs and improving efficiency within the organisation in order to better deliver its range of much needed programs and services to the Australian community.

When a four year lease on its aging fleet of MFD’s recently expired the board set up a committee to look into the replacement of these high cost copiers. 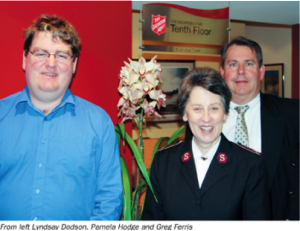 These three executives each played a crucial role in ensuring that the tender and implementation processes met all of the KPI’s set out by the board.

According to Greg the tender process involved the IT department gathering information on current print usage as well as looking into present and future needs in the area of technology.

“We had a fleet of another brand MFD’s spread across the six floors of this building as well as some located in outside sites,” said Greg.

“We knew from our research that the operating costs we were paying on our aging MFD’s fleet were about three times the market rate.”

He said that in order to get a fair judgement  on what to replace them with they decided to go to the market and call for tenders from six different manufacturers.

“From the IT department’s analysis we knew what our requirements were and we supplied that information to the six different suppliers as part of the tender process,” he said.

“Toshiba were very thorough  in their response to the tender. Not only did they respond to the actual document but they also visited each department onsite in order to gain greater appreciation of our needs.”

From a field of six manufacturers Toshiba Australia was awarded the tender to supply a fleet of e-STUDIO MFD’s throughout the entire 6 floors of the Elizabeth Street headquarters.

“We standardized on a fleet of e-STUDIO 3500c MFD’s throughout the building except for the finance department which has a faster black and white e-STUDIO 452 MFD,” Greg said.

He said that Toshiba won the tender based on a combination of price, The Salvation Army’s positive experience with Toshiba’s service levels at other sites and certain features and benefits that the e-STUDIO provided which were not matched by the other suppliers.

“Replacing the old MFD’s with more cost effective Toshiba e-STUDIO MFD’s and taking advantage of the leap forward in technology was really a no brainer,” he said.

Greg said that the savings since introducing the Toshiba e-STUDIO’s is in the order of $150,000 on copy costs alone. As well they have been able to remove the majority of the desktop printers saving even more money.

According to Lyndsay Dodson an important feature of the e-STUDIO was the inclusion of Toshiba’s e-Bridge Fleet Management software.

“Using this powerful software our IT department can now easily print off reports on the number of copies made by any of the e-STUDIO MFD’s in the building from one central point. It’s a great management tool,” said Lyndsay.

But it was the implementation process that really impressed The Salvation Army’s management  and staff.

According to Pamela Hodge who headed up the implementation committee her role was to ensure a smooth transition of the introduction of the e-STUDIO MFD’s.

“Toshiba’s Major Account Team consisting of Chris Robilliard and Frank Walsh were extremely helpful. They visited the site on numerous occasions and together we consulted with staff to ensure a smooth implementation with a minimum of disruption,” said Pamela.

The installation of Toshiba e-STUDIO MFD’s throughout the entire six floors of the building including installing devices onto the network, removal of old devices and basic training of staff was carried out efficiently over seven days.

Greg said that Toshiba has since gained preferred supplier status for the ongoing supply of MFD’s to their field offices throughout New South Wales, Queensland and the Northern Territory.