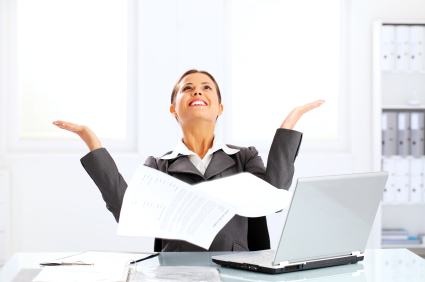 Two million pages are printed every minute across Europe, Middle East and Africa (EMEA). That’s the equivalent of chopping down 63 trees per minute* or a volume of paper to cover almost 17.5 football stadium. If the paperless office may still be a myth, the “less-paper” office is a very tangible, measurable and achievable target which is now integrated in most corporate policies.

Here are the top 3 paper usage technologies that companies, large and small, have implemented.

Following an investigation, a London based company found that their employees were printing up to 1200 pages a day on average. Up to 15% of these pages were being left unclaimed at the printer and then subsequently discarded. Further research revealed that most individuals were printing in simplex mode and in colour – i.e. the default printer setting. Ultimately copious amounts of paper and print consumables were being wasted.

To overcome these issues, the IT team replaced their standalone printers with a fleet of modern day multi-function printers (MFPs) which was combined with powerful print management software.

In the first instance, these MFPs offered a strong centralised printing, scanning and copying platform. This allowed the company greater control as they were able to define the default settings that provided the optimal output. When integrated with additional print management software, it offered the company more capabilities to further fortify the it’s paper management strategy – two of which included secure and rule based printing.

The deployment of Secure Print technology meant that user authentication was now required at the MFP in order to release the print. Not only did this improved document security as only authorised users could access their printed documents, but it also gave users a second chance to decide whether to print the document – or not, as in many cases. This alone wiped out unclaimed paper completely (i.e. 15% reduction in paper consumption)as those print jobs that were left unreleased, by the user were simply deleted off the server.

Other measures could also be implemented thanks to this technology. Among them was rule based printing (which automatically routes print jobs to the most appropriate, cost effective device). It permitted default settings per departments (e.g: print and copy in duplex, in greyscale) which cut the cost of consumables (paper, toners…) consumed by a further 25%.

Aside from an reduction of the company’s footprint, the optimisation of the paper and its related tangible and intangible costs (environmental impact, improved processes and productivity) generated significant cost savings, equivalent to a little more than 3% of the company’s total revenue.

A mid-sized law firm needed to expand their storage space to accommodate the growing number of paper-based matter files. Facing the highly inflated property prices in London, they decided that the most viable and cost effective investment would be to convert these matters into digital files. Using a scanner with advanced optical character recognition (OCR) capabilities, the firm transformed over 100,000 hard copy documents into fully editable and searchable electronic ones.

In the first instance, this significantly reduced the amount of paper and therefore storage space. Secondly, it allowed the firm to convert these documents into a keyword searchable information repository. In turn, information could now be retrieved quickly and sent to team members and clients electronically further reducing the need for paper.

Today, instead of making copies of files to store in a paper filing system, employees simply scan and digitally store these. Thanks to scanning, the law firm has reduced the amount of paper consumed despite a 20% percent increase in their case load.

Tasked with a strategy to reduce print costs by 60% and improve workflow productivity while decreasing the space used for storing files by 17%, an innovative UK based firm took on a sizable initiative to move to a completely digital client matter environment. Traditionally a paper and print intensive process, they decided that the amount of time and money spent on printing and sending documents was both unproductive and costly.

The firm decided to switch to a digital binder solution which provided a platform to create matters electronically. Replicating a traditional paper based ring binder, the digital binder offered a central location for team member to store, access, review and annotate documents in multiple formats. This centralised approach to managing documents eliminated the need to print multiple versions of documents as these were being updated for instance. The firm also integrated a secure file sharing solution which allowed team members to share entire binders and large documents to multiple team members rather than sending sporadic documents via email.

Today, their printing costs have fallen by 60% in the first year as well as storage costs with client matter files now being digitally archived.

Although taking the initiative to reduce paper consumption can take time, effort and investment depending on the technology itself and the organisation’s culture, the return on investment can have a far greater, positive impact. By taking various steps to a less paper operation, not only does it translate into cost savings and improved document processes, but demonstrating the use of secure, innovative technologies such as digital binders can help position a firm as forward thinking and a cut above the rest in a client’s mind – especially in the highly digitised world that we operate in today.