You’ve been on your phone for 160 Minutes today! 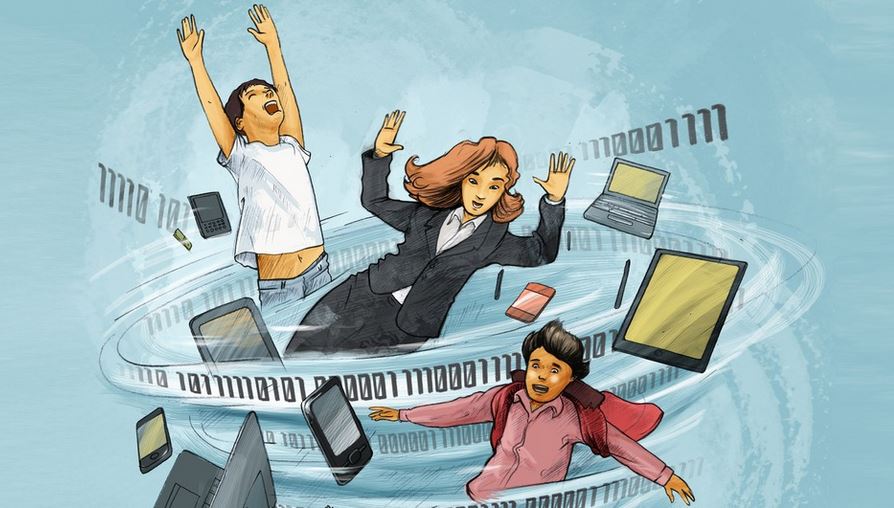 The sun is still heaving its way into the sky when I receive the first of the day’s many damning push notifications: “You’ve been on your iPhone for 20 minutes today.”

Twenty minutes. In that time, I could have prepared myself a proper breakfast, or gone for a quick jog around the neighborhood. Instead I’d grabbed my phone when its morning alarm woke me, and I never let go. I checked my work and personal emails (sadly, in that order) and then scrolled through my endless Twitter feed (first scanning for news, then just because) until the notification reminded me of how much time I’d taken up.

A few days earlier, I’d installed a new app called Moment, which promises to track your daily iPhone screen time and perhaps guilt you into cutting that time down. On my first day using the app, I clocked in at around two hours. Each day of the first week, I topped the 100-minute mark without fail and once neared the three-hour mark. It sounded like an awful lot of time to spend staring at a four-inch screen, but what was there to compare it to?

There is no standard metric for how much mobile time is too much.

Part of what inspired me to try Moment was the possibility of at least getting a better metric for my own usage. And part of what inspired me was some sense of kinship with the app’s creator, Kevin Holesh. Like me, Holesh is a 20-something professional whose line of work requires sitting in front of one screen or another for most of the day. Like me, he occasionally gets a little too hooked on certain products — in the fifth grade, he logged 140 hours playing Pokemon on his Gameboy before his mom cracked down — but he wouldn’t necessarily describe himself as the type who gets “addicted” to technology. Like me, he felt compelled to make a change after moving in with his significant other and realizing that unnecessary time spent on his phone was taking away from quality time spent with the woman he loved.

“It’s the compulsion to pick up my phone when I’m bored that I’m trying to get rid of,” Holesh told me during the first of several conversations last month. “I went from work to dinner to zoning out on the couch with my phone. If I’m waiting in line at the post office for four minutes, I usually just take out my iPhone and distract myself with Twitter or email, rather than just standing there and thinking for four minutes.”

My goal for my personal life,” he says, “is to eliminate the mindless time on my iPhone.

Holesh, a freelance web developer, worked for six months to build an app with that goal in mind. He found a way to detect if the iPhone screen was turned on using a publicly available API. Then he refined the tracker to ignore instances when the screen lights up automatically with a push notification even though the user doesn’t actually check it.

The result is a rudimentary tool that offers a rough estimate of the total minutes you spend looking at your phone screen. It sends updates on that number throughout the day to break your smartphone trance. Holesh soon learned that he was on his phone for about 90 minutes per day, giving him a benchmark for improvement. By comparison, he found the average person looks at his or her phone for a little more than an hour (62 minutes) each day, based on an analysis of the app’s 50,000 or so active users. The biggest chunk of that time comes after 6 p.m. when users presumably behave like Holesh and go from work to dinner to zoning out with phone in hand.

What Moment’s data can’t tell you is how much time you spend doing something productive on your phone, versus playing Candy Crush or pretending to type text messages to look busy in public. It won’t sync with other devices to give you a broader sense of your total screen time throughout the day (Holesh hopes to do this down the road). It doesn’t give you much context at all beyond the number of minutes.

I found myself looking at those numbers — 120, 140, 160 minutes a day on my iPhone — and worrying about how much higher it was than the average. Am I a binge smartphone user? I wondered. Do I have a problem?

Every few months, a new report seems to come out about our mobile habits. The numbers and measurement tools vary, but what’s true across the board is that time spent on mobile is always increasing as mobile devices get better, cheaper and more broadly adopted.

Then there’s Flurry, an app analytics service recently acquired by Yahoo, which put out areport in April with the ominous title, “The Rise of the Mobile Addict.” According to the report, the average user opens up apps 10 times per day on his smartphone or tablet. With that in mind, Flurry defined a “mobile addict” as anyone who opens apps more than 60 times per day. And there are a lot of them around the world, perhaps including myself.

“In March of 2014, there were 176 million mobile addicts, up from 79 million in March of 2013,” the researchers at Flurry wrote. “That is astonishing growth in a single year.”

That “astonishing growth” in mobile usage may explain why more apps are popping up to help people be smarter about their smartphone use. In addition to Moment, there’s BreakFree, which markets itself as “controlling smartphone addiction” by tracking Android app usage, The Mobile Flow, which tracks how long you stay off your iPhone, and RescueTime, which tracks your productivity and “distractions” on Android. Both BreakFree and RescueTime are now developing similar apps for the iPhone, a more difficult task as Apple limits the type of user data apps can collect.

RescueTime, in particular, has quite a bit of experience helping people manage their screen time. It was started in 2007 with the goal of providing tools to track time spent on various desktop tasks after its founders got frustrated about never being productive enough in their day jobs. Then, within a matter of months, Apple launched the original iPhone. That kicked off the modern smartphone era and with it an era of too many screens: not just televisions and computers, but smartphones, smartwatches and smartglasses. Screens looking at screens looking at screens, each with newfound potential to suck up our time.

“That is something we just didn’t have to contend with 10 years ago: swimming in this sea of different devices,” says Robby Macdonell, head of product development at RescueTime. “We haven’t had this problem long enough to know how to deal with it. By giving people an accurate set of data about themselves, it seems like that helps.”

Macdonell and his team are looking to do more than just provide data, though. They are now developing mobile alerts that users can customize to notify themselves about approaching their day’s quota for social networking or games or whatever their digital vice may be. It could prove to be an effective way for users to curb their habits rather than just stare shellshocked at the day’s data, as I did with Moment and even Macdonell has done with his own app.

When Macdonell first tried out the RescueTime app, he discovered he was on his phone for “just shy” of three hours a day. By comparison, he says the app’s average user now logs about two hours of smartphone time. “When I saw that,” he says, referring to his own usage time, “I was like, ‘No, that’s wrong.'”

That initial shock may still prove the most powerful tool to make a change.

Early last year The New Yorker published a cartoon of an otherwise respectable looking man talking to a woman in a bar while wearing a protective cone around his head. The cartoon’s caption read: “It keeps me from looking at my phone every two seconds.”

That cartoon struck a chord with many, popping up on a number of websites. Liam Francis Walsh, the artist who drew it, heard the same line over and over again from readers in response to the cartoon: “That’s just like me.”

Walsh, a self-described luddite who lives without a smartphone, frequently tries to shine a light on some of the absurdities of technology in our culture so people may recognize it in their own lives. “It did kind of sneak into our lives,” he says of smartphones.

“Aside from walking into a lamp post, it’s good if there are other ways to let yourself be a little bit observant, a little bit present.”

That’s a lesson he learned in his early 20s after seeing a video of himself drunk. “I quit drinking … I was so repulsed by this film,” he says. “Maybe if people were able to see what they look like to other people…” He pauses, then the solution dawns on him: “An app that every once in awhile shows a video of your zombie face staring at your phone every 15 minutes.”

An app like that might be a tough sell to users, but at their most basic, the time tracking apps are really tools to help each of us diagnose what is absurd about our own behavior. If the impulse to download one of these apps isn’t enough of a wake up call to rethink our mobile habits, then the grim data each provides certainly will be.

“By and large, 99% of the population just has bad habits [on mobile],” says Nir Eyal, author ofHooked: How to Build Habit-Forming Products. Bad habits may be troubling, but they’re inherently different from addictions, which are behaviors we can’t seem to control even if they do us harm. “When you think about [habits], you can moderate without too much difficulty.”

What makes us all so susceptible to picking up bad smartphone habits is the fact that these devices are always with us. “They provide new triggering opportunities,” he says, noting the many prompts to check one’s phone, which come from social media and messaging apps. “Because technology is more pervasive, it is also more persuasive.” That trend will only continue as mobile products become more seamless and embedded in our lives.

Yet, there is something else that makes newer technology different than other consumer products one might get hooked on, something that may offer a glimmer of hope.

“For the first time, these potentially addictive products know how much we are using them, and that’s a big deal,” Eyal says. “If you are an alcohol distiller, you can throw up your hands and say, ‘We don’t know who is an alcoholic.’ But these products know exactly who we are and how we’re using them.”

That doesn’t mean you should expect an Apple Genius to call you and say, “We think you’ve had enough time on your iPhone tonight. May we recommend a walk on the beach instead?” But some developers may one day decide it would benefit the overall user experience to recommend users take breaks from certain apps once in awhile.

For now, all we have is the dull awareness that we might be a little too glued to a screen and a few apps that might repulse us into making a change.

After a few weeks of using Moment, I’m still on my smartphone for at least 90-100 minutes a day, but I’m trying to be more deliberate about when and why. If the app tells me I’ve already been on my phone for much more than an hour by the time I get home from work, I make more of a conscious effort to stay off it unless there’s a good reason. If I feel the compulsion to check my iPhone during the day for no reason whatsoever, I try to think of those numbers — 120, 140, 160 minutes a day. Sometimes it works. Sometimes my hand keeps reaching for it anyway.